Polysingularity of Thinking and Sensing

Polysingularity of thinking is knowing that several solutions are possible and yet only some are actualized at every moment of time.

It is inspired by the human brain and especially its ability to remain simultaneously stable and flexible through a combination of local and global synchronization. Local clusters of neurons engage in winnerless competetion to produce islands of non-equilibrium stability through synchronization. These islands synchronize globally to produce complex sensorimotor behaviors. Over time neural network transforms structurally, segregating the old neural communities and creating the new ones, integrating periphery and renewing the center. Such dynamic behavior allows the brain to combine stability with flexibility and remain adaptable to internal and external challenges it encounters.
It has been shown that the most optimal structure that allows both global synchronization and local distinct states of non-equilibrium stability is the small-world network. It combines high connectivity with prominent community structure. The neurons are organized in densely connected clusters, which are connected together through the global workspace. 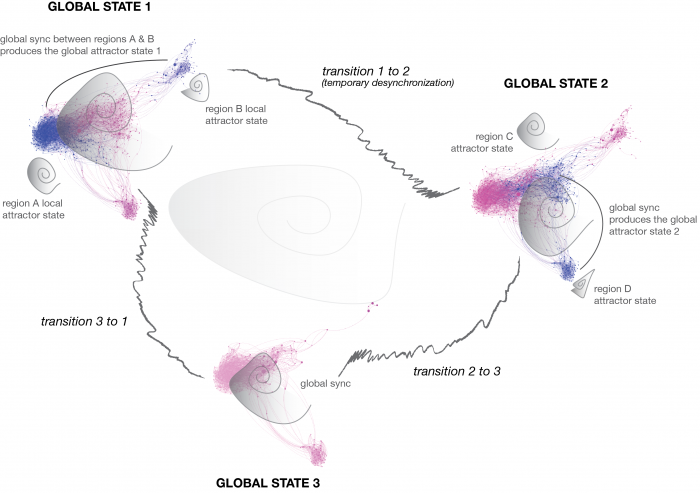 Polysingularity of thinking functions in a similar way.

We can represent the concepts that we operate as the nodes and the relations between these concepts as the edges connecting the nodes in a network. The resulting semantic network can be represented as a graph, so we can use basic metrics in order to understand its structure and the processes that it allows. 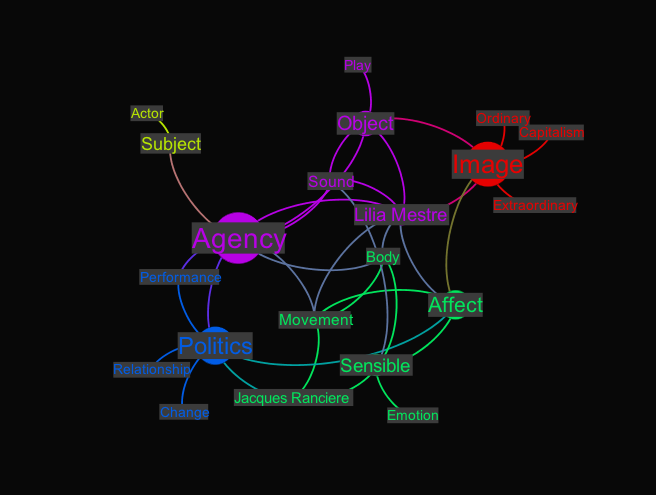 For example, if the resulting network is a densely interconnected network where most of the concepts are connected to one another, we are dealing with an instance of a random network. Such network can synchronize on the global level, however it doesn’t allow for local areas of non-equilibrium stability to emerge, thus it excludes any possibility of heterogeneity within.
On a practical level that means that someone has a certain set of beliefs and is unwilling to acknowledge that things could be otherwise.

On the other hand, if the network has a prominent community structure and the clusters of concepts that one is operating are not connected, there won’t be a possibility for global synchronization.
On a practical level that means that someone has a lot of different interests that are too segregated, so the state of cognitive dissonance is very likely to emerge.

If the network has small-world structure where the concepts are grouped in distinct communities (where nodes are more densely connected together than to the rest of the network) and where these communities are also connected on the global level, then we are looking at a network that can maintain several distinct positions at once, while also making it possible for them to interact and produce the global states of non-equilibrium stability. Such dynamics is robust and flexible at the same time.
On a practical level that means that someone has several clusters of beliefs or interests, which are quite distinct, but nevertheless can inform and inspire one another. It also means that someone’s conceptual field is open for external influence, while protected against random perturbations from the outside.

At the core of polysingularity thinking practice is maintaining several centers at once. Being able to have distinct opinions and operate with different points of view. Their interaction on a global level produces distinct states of non-equilibrium stability at every moment of time. Temporary desynchronization produces transition until the new non-equilibrium stability is established through synchronization of different conceptual centers.

Polysingularity of thinking is a practice of being aware about all the possibilities, while being able to make specific choices.

It’s a practice of being naive in a way that is informed.

2. Everything is a process of synchronization. What we think is “true” is a constant process of reiterating a certain connectivity. All it takes to change one’s opinion is to change the connectivity that is synchronized. When I see a chair, I see a set of possibilities that it offers: from sitting on it, to throwing it into somewhere. But maybe the chair can also be caressed or talked to or used as an instrument of communication.

4. Make sure you know when to stop: the new knowledge that you are acquiring needs to be integrated, so you can synchronize it globally. It’s like food: you need to process what you are eating before you can eat even more. It’s also good to diversify your diet and to be sensitive to what your body needs at the moment.

5. Diversify your information sources. Get conflicting views on the same situation. Solidify your own opinion.

6. Stay out of informational bubble. Expand the sources of social interaction and information you get beyond your social circle. Look for the new random encounters and be sensitive to the ideas that prove that what you’ve known before was wrong.

1.  Tell a story, which has several coherent narratives, one after another, that are distinct and very different, but are still linked together (for example, emotionally or through the protagonist or through an object or one element or a certain intention).

2. Find an object you use on a daily basis (a chair, a cup, a bicycle) and try to find other ways of relating to it, explore the object’s polysingularity.

3. Next time you find yourself among other people, notice the way you feel about them and the way you feel among them. Then, while being in the very same situation, change a small feature of your perception and notice the difference. Imagine that you’ve just all been told you’re going to die in 5 minutes or that everyone around is in love with you.

4. Next time you talk to someone, notice the state where you’re at. Reiterate the state and use repetition to find a different way of feeling. Try it out. Change. Becoming aware of your breathing is a good tool to have a very tangible indicator of your condition and a basic control interface that can change the way you feel.

5. Next time you read the news, try to find an opposite point of view, expand the sources of information you get beyond your immediate surrounding.

7. Make a network diagram of the things you are interested in. Start with the one that is the most interesting for you. Then think what else it’s related to. Follow the many possible threads by association. When you have the resulting map try to see what the distinct communities are and what are the possibilities for bringing them together. Which communities are integrated into the network sufficiently? Which are too separated from it? Which are integrated too much?

8. Take all sides. At once. And insist on only one of them. Be free to shift.

9. Be a different person, embrace multiple personalities, insist on your point of view especially if you know that it’s wrong.
References: