Polysingularity is a practice of immunization.

Contagion occurs on many different levels. It may be an infectious disease, an ideology, a way of thinking, a set of habits, morals, code of behavior, the language we use, the movements we do, the music we hear, the feelings we have.

Immunization, then, can be both a way of resisting contagion and allowing oneself to be infected from multiple sources.

The ability of contagion to propagate depends on the social structure. A tightly-knit, highly interconnected network will synchronize easily, but it requires a strong initial impulse (seed) to propagate contagion throughout itself. A dispersed and disconnected network might only have local areas of contagion, but it’s very unlikely to propagate influence across the whole structure in a synchronized way. Practically that means that if you find yourself within a tightly-knit densely interconnected social constellation (i.e. you always stay within the same group and see the same people all of whom know each other), then you are much more likely to be “infected” by whatever consensus exists within this homogeneous structure. It is also very likely that you will not even know what’s happening on the outside. On the other hand, if you’re part of the structure that’s too loosely connected, you lose the ability to be part of something larger than you, to be collectively enchanted by a new idea, trend, habit, disease, or a way of thinking.

Polysingularity is a practice of oscillating between these two extremes. On one side, you are a part of a densely-connected community. You are easily susceptible to whatever the consent is within this structure at the moment. On the other side, you are also aware of the other densely-connected communities that exist on the outside. You keep in touch. You are ready to be infected by something else as soon as the moment comes. You are not betraying all sides, you are siding with all of them at the same time. Each moment you choose what network you are a part of, but you are also aware of the other possibilities out there and you are ready to change (or extend) at any moment. You also act as an agent of inter-group contamination. You enable ideas from one community to flow into another. You resist and you let go, you practice immunization through allowing yourself to be infected by multiple sources. 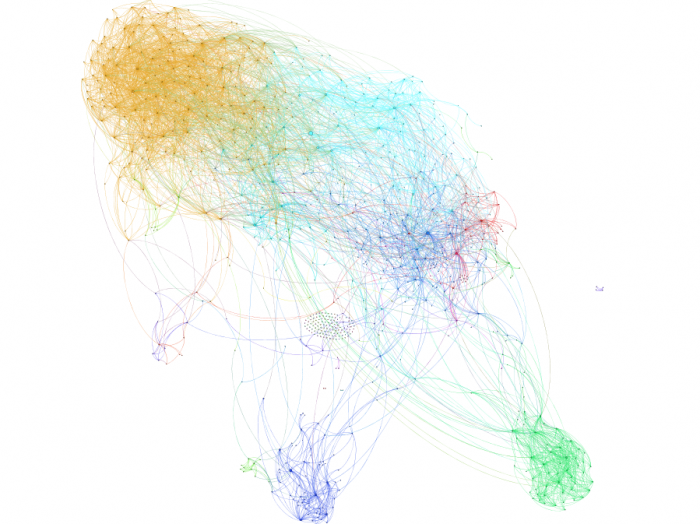 The same goes for ideas, by the way. How can we think polysingular? It’s through the constant reiteration of what we already know, in a deeply engaged methodological way. But it’s also through being open to explore new areas, being willing to build new conceptual constellations and build bridges between them and what we already know. This goes beyond getting the information from multiple sources or being “objective”. Rather, it’s the ability to be highly subjective, but in a way that you can change your opinion very easily. Not to the opposite one, but to the many different ones that are available or not available yet.