On the Future of Virtual Reality and Simulation From the book of Re~ports November 24, 2016

The report below was written in response to Changing the Picture – the conference on storytelling and technology that took place in Berlin’s Babelsberg studios in November 2016.

Everyone lives in the stories they’re telling themselves. Many of those stories are imagined and told by somebody else and that’s where the one who speaks can have an agency and direct influence on others.

This interaction is never completely direct. There’s always an interface or a medium: language, screen, body… The interface has an effect on the structure and content of the narrative that is transmitted through it. Contemporary storytelling heavily relies on technology and one of the most influential mediums today is the moving image. So in order to know the kind of stories that will be shaping the future, one needs to look at technology and the direction it is evolving in.

The current state of things in storytelling is affected by the three main trends.

First, there’s a trend towards minification, fragmentation, and – as a result – the emergence of reiterative narratives. Books are dispersed into short stories. Stories are dispersed into tweets. Series are preferred to feature films. YouTube videos get more audience than series. Monetization is still lagging behind, but it is only a matter of time before minified content becomes more profitable. Netflix is a good example, but even a better example is the computer games industry – short interactive moments that reiterate the same narrative are much more profitable than long feature films.

Many creative production processes today fully assume the paradigm of agile development, which has been dominating the software world for more than a decade already: constant delivery through short-term iteration cycles. This, in turn, influences the way narratives are constructed today. Linear stories are left aside and what comes at the forefront are cyclical narrative patterns, which repeat themselves from iteration to iteration, reinforcing the main structural elements of the narrative that inscribes itself into content.

Content distribution patterns are also changing. In the world where attention span is somewhere between 1 and 2 minutes, everything has to be short and concise if it wants to exist in a way that is economically viable. Content producers today compete for short moments of attention. And their task is not only to retain, but also to bring back distracted viewers. That’s why serial content is so important but it is even more important that the content is made in such a way that it can connect to external narrative threads, so that it makes it easy for the audience to leave and to come back again.

Consumers are subjected to bits and pieces of content from which they can weave their own narratives aided by recommendation algorithms (e.g. YouTube’s similar videos). The illusion of choice gives a sense of agency to the one who is receiving the story. The algorithms are not made to transmit certain meanings, communicate ideas, or to be coherent. They are designed to maximize viewing time and retention. Therefore something that is “catchy” from the very first second has much more chances to survive. And if that “catchy” transmits the logic of iterative narrative that is to follow, again and again, then it becomes successful because it contains its essence within the smallest parts of itself.

Secondly, there’s a trend towards introducing metadata into video content. This makes it not only easier to collaborate but it also offers new possibilities for interactive storytelling. Ian Forrester, Senior Firestarter Producer at the BBC, is developing a system called “Visual Perceptive Media” which enables filmmakers to assemble different parallel narratives in real time, based on the viewers’ profiles. John C. Roselund and Kvae Stein (drylab, Oslo) used metadata extensively when working on King’s Choice feature film, enabling real-time collaboration across different countries and teams as well as aggregating of material on film set. When metadata across different platforms is standardised, it opens immense possibilities for building the projects based on linking different narratives together (e.g. linking one series to another based on the content complimentarity rather than similarity-based recommender algorithms).

Finally, there’s a trend towards realistic simulation. Resolution is one of the main topics at tech conferences today. Human eye’s resolution is about 60 pixels per degree, therefore, for a field of view that is 120 degrees, it is enough to have 8K resolution for it to be indistinguishable from the “real world”. The new models of VR headsets already have 4K resolution coming up to the market, so it’s going to take only a couple of years until we will be seeing the images that will be indistinguishable from reality. Ambisonic sound systems will take care of reaplistic representation of auditory input in space. Haptic suits as well as movement and head tracking systems will ensure that there’s a link between the physical movement and simulated realities. The last step is to finally start embedding the virtual into the real and Google is already on it with its several billion investment into the mixed reality startup Magic Leap. Once this future inscribes itself into the real, space and time will not exist in the same way as before and teleportation will become part of everyday life. This is already happening and many companies, such as ILMxLab, co-founded by Michael Koperwas, are already experimenting with Mixed Reality implementations of virtual narrative into the real world.

But what will we do once this happens? Most of the videos produced for VR today seem to be simply content with their own existence: tech demos, showing what’s possible but not really taking it yet anywhere into any specific direction. It’s like we’ve finally made it to Mars, but there was not any real plan of what to do once we get there. So we are standing, watching silently, observing the surface of the planet, wondering what to do next. Perhaps, it is also a moment in time that demands us to stop and observe before moving to the next stage. 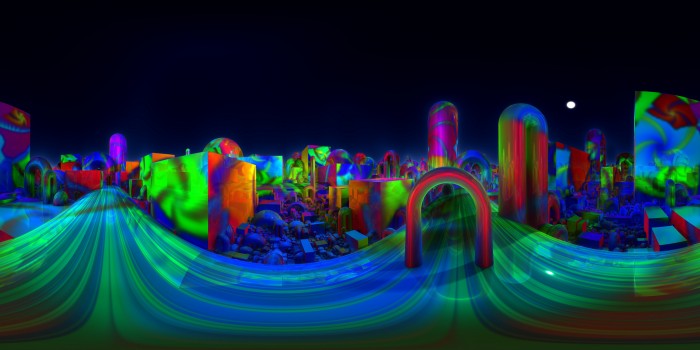 The medium is still full of limitations. Resolution is not yet at the level that is indistinguishable from reality. Movement is not yet fully possible. Sound could be better. Haptic feedback could be better. However, what would happen if we accept all these limitations? What would happen if we make something about the quest towards the realistic simulation itself? Right now it’s the special moment in the story of simulation itself. The protagonist is immobile and cannot move (it is still very expensive to produce realistic video content that integrates full body movement). Only the head can turn. Resolution is not yet fully realistic: the image is pixelated. The environment is immersive, but what we are immersed in is the story of an attempt to make something realistic that falls short of its own ambition because of the technological limitations. So the honest story to tell at the moment is the story of trying and witnessing, waiting and trying again, reiterating, making small steps at a time, waiting again, tasting pixelated transmissions from the future that is about to come, getting seduced into nothingness, letting the mind run ahead of the body, crashing against the impossibility only to try again and again.