Throwing the Violence Back onto Itself

Gregory Bateson proposes a very interesting example in his description of the double-bind phenomena as a cause for schizophrenic reaction.

A plane passenger faces the situation where she has a neighbor who really wants to talk to her. She cannot escape before the flight ends, she doesn’t want to engage into a conversation, but she also does not want to appear rude and break social codes of behavior.

So the only possible response, if she still wants it her way, is to go crazy.

To do something outside of the expected context in order to disrupt the double bind she finds herself in.

As much as such behavior may serve as an explanation to schizophrenia, it also may be a recipe for dealing with situations like this in everyday life.

Aleksei Taruts’ work “Outside of Ritual” is a similar kind of response to the situation of violence.

Anyone who has access to the internet will also have to face a flow of extremities: the automatic algorithms make sure that the kind of content that has the ability to touch will get the most attention (and likes).

What’s left is to hold those grenade fragments together, mould a cobblestone out of them, throw it back at the violence. A craziness of sorts. An escape to avoid dominance and submission.

“Outside of Ritual” shows fragments of an incident filmed with CCTV cameras outside of a Moscow nightclub. Each of the four fragments is projected onto a side of a cross. Violence spreads through the pixelated time-coded image in a chaotic way. Somebody is punching somebody else. Someone else is lying on the floor. Gunshots. Running. Each projection rotates in a 3-dimensional plane projected on a flat screen surface. Each rotating image is penetrated with a 3D Tellurium marble-like cobblestone, which breaks the image with algorithmical methodology while touching onto its surface in an almost sexually stimulating way. 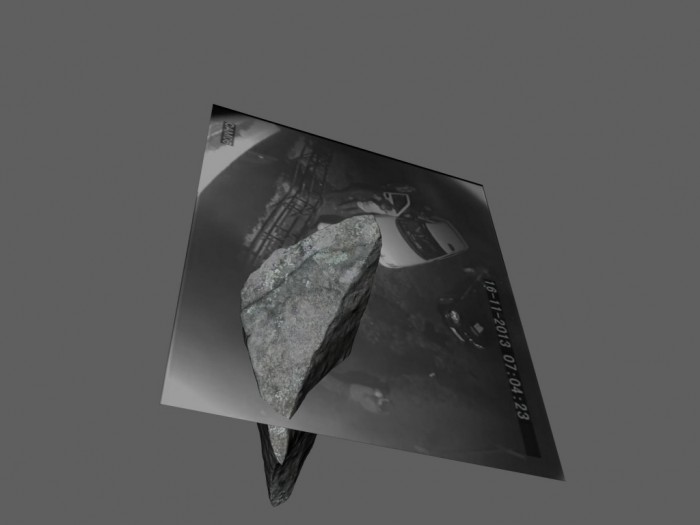 It is a cobblestone flying back into the violence. It is also a magical and enchanting object, which renegates the moral and ethical view of the subject instead elevating it into an almost spiritual search for the meaning, which is not there. However, it’s the intention that matters in this case and in the end this action is neither escape, nor acceptance, neither a fight. It is wrapping and warping the tangible ends of reality which is exploding through us, and throwing it back into the black hole it’s coming from.

In this way, the whole idea of the “moving image” takes a whole new meaning. The famous train scene of Lumière brothers claimed the power that cinema has on perception. To move the already moving image is an attempt to claim the power back from the cinema, to take some degree of control from the media, to work with the flow of violence in an intelligently crazy way. 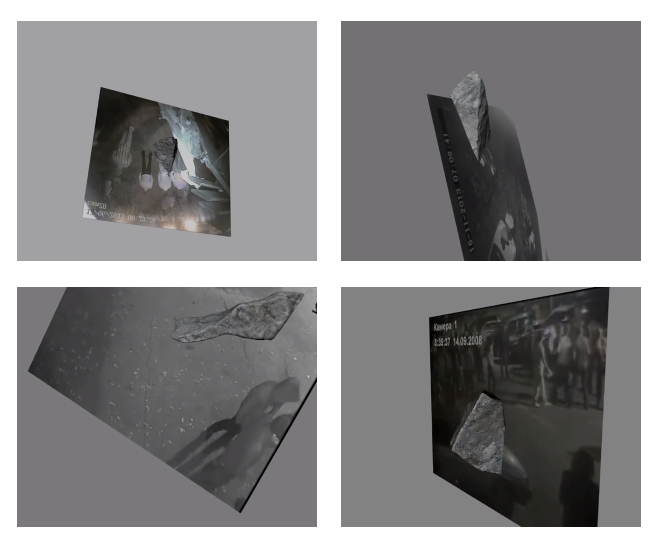